In 1959, my father Franco together with my mother Anna and my father’s brother decided to open, with a few money and many debits, a quality restaurant and a pizza place called “La Caravella”. We can say that it was a quality “trattoria”. Already in the Sixties, my parents were the first ones to be awared Michelin star in Southern Italy. At those times, there were no more than 10 starred restaurants in Italy and I am not sure if my parents were aware of the importance of the Star.

In the Eighties they lose the Star but I got it back in the Nineties. At that time was really very hard to be awarded with the Star for the second time.

The history of La Caravella is incredible; it’s a story which is kept in the showcases of the memories of many people no longer alive. It was just in the Sixties that La Caravella represented with pride the meeting point of the lovers Grand Tour on the Amalfi Coast, the place were tumultuous love were born, where secreted deal where signed, where everything gave a contribution to make the Amalfi Coast what it represents in modern time: one of the most known and admired places in the world.

In the Sixties the restaurants in Amalfi were only about 10. Opposite our restaurant there were some benches out of lava stones, very beautiful benches which were then removed to make the road larger for the buses to pass over. My mother, beyond working in the restaurant, was also a housewife and we were all young children. Every evening, while home, she always asked me to walk to the restaurant and check how many people were sitting on the benches waiting for a table. In this way she could figure out what time she should have cooked dinner for my father.

I was less than 10 years old and I remember my concern (I was very shy) when my father introduced me to Aldo Moro, Gore Vidal, Jacqueline Kennedy or the famous lawyer Agnelli and many others I can’t even remember, all people who have really written the history of the 1900s.

La Caravella has always been the reference point for all jet-set people from all over the world. Many wealthy and powerful people enjoyed secret visits at our place and many times we couldn’t identify them. We think that each customer is a special one. The pride of having very high quality people is the dream of all restaurant owners. Seeing repeated customers while eating at our tables to enjoy an evening at La Caravella, or watching them repeating the same “rite” of walking from the dining rooms to our art gallery and to the cellar through the kitchen is something emotional and speechless.

This is the reason which feeds our daily enthusiasm to wake up every morning with the same passion of when I was 20. There are no other acknowledgements which can compensate yourself.

In 1987, after many experiences all over the world, it was my time to take over. I just needed to follow my family tradition. Within those years I was able to predict the change of the direction of the Italian food service; I began turning the trattoria into a proper restaurant and, thanks to the help of my friend Antonio Cosentino, I started suggesting people new recipes which still today represent a reference for many restaurants of the Amalfi Coast. I was able to make a dream come true by the setting of a cellar with temperature and humidity control which was something new at that time. Many colleagues thought I was crazy, my passion was intended as an insanity but I was just looking forward.

The combination food-wine-art has nowadays turned into a winning formula of all the excellent restaurants in the world.

The secret to create a successful brand like La Caravella….my parents, a good team, a lot of passion and a great heart, and a small bond with the money. My foresight was to always believe in what I was doing; at the very beginning it was hard for sure but, after 60 years, I can say to manage a restaurant with a museum which includes one of the most important collections of the ceramics from the Amalfi Coast in the world. Our cuisine is known and appreciated from people all over the world. Our cellar is one of the best in the world and the art gallery is a reference point for the most amazing ceramics of the area. I often think if I would the same again but I think would be impossible. 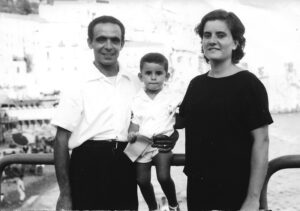